Cam Perkins, Warner Robins, 2024: One of the few freshmen in camp, Perkins competed hard. He used his shiftiness to keep defenders off balance and dropped dimes to his teammates on the wing. It will be fun to watch his development at the point guard position over the next four years.

Kowacie Reeves Jr., Westside-Macon, 2021: First thing that jumps out is his long-lean frame. The 6-foot-6 University of Florida commit oozes upside. Despite not putting on his usual offensive clinic, he had a couple moments where spectators got a glimpse of his high major talent. Look for Reeves Jr. to end his high school career with a bang.

Courtney Green, Rutland, 2020: Green was one-of-two graduated unsigned senior in attendance. The 6-foot-4 combo forward had a few bright spots and hopefully will see some type of return from it, but for now we’ll have to wait and see. I liked how he competed and approached each game with a positive attitude.

Christian Moore, Washington County, 2021: As a point guard, he did a nice job zigzagging through traffic getting to the basket. Moore is in line for an expanded role at Washington County this season, so it’ll be interesting to see how he settles in. Nevertheless, the Open Run was a good opportunity for the senior to measure himself against the best in Middle Georgia.

Khamren Little, Mary Persons, 2023: Little got better and better as the day moved along. He shot as well as anyone at camp and was confident letting it fly. I would not be surprised to see the sophomore guard takeover as Mary Persons lead guy this season.

Demauriye Gasque, McDonough, 2022: A bruising small forward that made defenders feel it all day. The 6-foot-5 junior initiated contact with his back to the basket and flourished knocking down one-legged midpost fadeaways. His combination of power and skill will make him an intriguing prospect on the recruiting trail.

Nylan Martin, Macon County, 2021: Martin showed versatility playing both forward positions. He rebounded well and was solid getting second chance points. With good size at 6-foot-6 and respectable production this season someone will certainly look twice at the available senior. 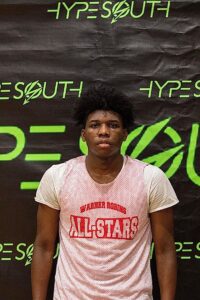 Daquan Brown, Macon County, 2022: Opportunities to shine are often hard to come by in camp settings, but Brown was very efficient with limited touches. I don’t recall seeing him miss a shot. He played hard and took in all the coaching and training at camp.

Shazmere Thomas (pictured), Banneker, 2021: He came and proved himself as a solid wing option. Thomas was able to showcase good perimeter skills, being able to handle the ball and shoot it from downtown. Lee University and Middle Georgia Prep made contact with him following the Open Run.

Kristian Plummer, Cortland, 2020: Plummer, the other graduated unsigned senior, was the lone out-of-state player in attendance. He came in from Virginia and was thrown into the fire, but held his own. We’ll have to wait until the dust settles to see what happens here.