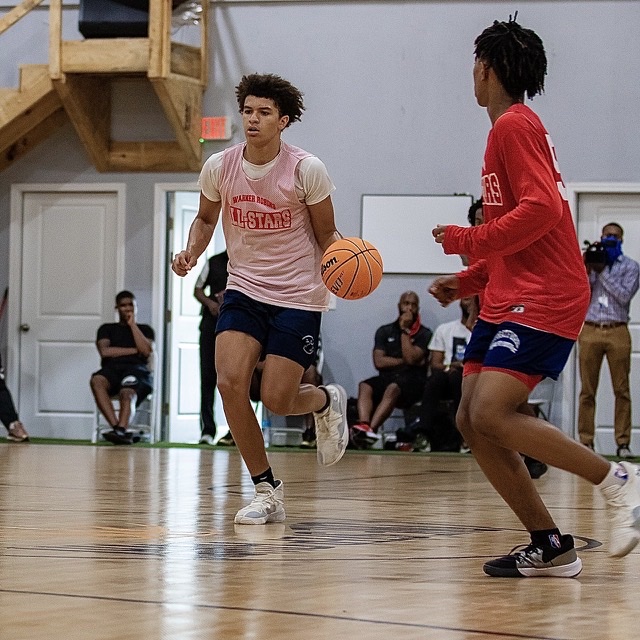 Warner Robins, GA – The Inaugural Open Run Weekend invaded the beautiful One Step Away Gymnasium on Saturday and Sunday. With prospects from Middle Georgia, South Georgia, and South Atlanta in the building, there was a lot to take in.

Nickolas Woodard, Taylor County: The 6-foot-5 wing from the class of 2022 just continues to get better and better. He’s a deadeye shooter from beyond the arc and uses his big frame superbly on the offensive interior getting second chance opportunities. He was the most consistent prospect throughout the day and played his way onto several radars as a result. Woodard is a viable 3-and-D option, should he continue trending upward, will become a priority prospect once colleges turn their full attention to the 2022 class. 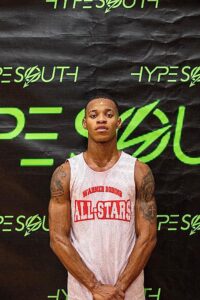 Caleb Moore, Washington County (pictured): The 6-foot point guard from Waco High School (GA) was on a clear mission from the outset. Moore was in attack mode offensively finishing strong at the rim and played with a chip on the defensive side. His strong core and on-ball defense jumped off the screen as he pushed guys off their mark on straight line drives. We totally missed on Moore in our Hypesouth25 Player Rankings, but expect to see his name on the list moving forward.

TJ Grant, Veterans: The class of 2022 wing had a good day displaying a developing three-ball shot and making a living in the midpost area. Grant, a fundamentally sound prospect at 6-foot-6 caught the eye of several college coaches in attendance and tuning in via live stream. The junior holds an offer from Mercer and could add to his list following this weekend’s Open Run.

Jamal Taylor, Hancock: Taylor was a steady hand at point guard, turning defense into offense and always making the right decision. He got out in transition shooting passing lanes and made the most of drive-and-kick opportunities. The state championship floor general was one of the best leaders in attendance.

Jordan Brown, Northside-Warner Robins: Brown is our top Middle Georgia big-man and he showed why at the Open Run Event this weekend. The Northside rim protector was the most productive interior defender on hand. He impressed on helpside shot blocks as well as guarding smaller opponents on switches. His defensive timing and hand-eye coordination at 6-foot-8 will keep his name in conversations on the recruiting trail.

Kole Taylor, Morrow: A lot of what Taylor did yesterday went unnoticed mainly because everyone prefers highlight plays. However, I will always respect players that play the right way. The lefty guard took care of the ball, passed it ahead to open teammates, picked his spots scoring, and made the correct defensive rotations. In two years he’ll make some college coach look like a genius.

Greg Jones, Warner Robins: The 6-foot-3 glue guy has no stop in him in between the lines. His constant motor will eventually force coaches to check in. Jones was not the most skilled player at the Open Run, but his consistent energy and effort was on full display and should be taken into account for programs looking for a viable utility player. Khalil Green, Stratford, 2024: Green was one-of-two freshmen on hand, but you couldn’t tell it by his play. His maturity, poise, and skillset will put him in position to become a household name statewide out the gate.

Jaylen Sanford, Jones County, 2023 (pictured): The sophomore guard got to his spots pushing tempo and matched the physicality of the upperclassmen. Sanford has all the physical attributes and tools to be a star for the Greyhounds. Stash this name in your notepads.

Aaron Jones, Veterans, 2023: A young 6-foot-9 post player that showed the courage mixing it up down low with bigger-stronger opponents. Right now, he is a project big-man that has the potential to be one of the best rim protectors and rebounders in the state once he puts it all together. Jones will be an intriguing prospect to monitor moving forward.