Macon, Georgia – The Hypesouth Girl’s Unsigned Hype Camp went off in a major way this past weekend. The event featured over 40 young ladies from the mid-state area and this week we’ll be breaking down players from top to bottom here at hypesouth.com, your premier source for hoops coverage in Middle Georgia. Let’s check out a few backcourt standouts from camp.

Agee is a score first guard that possesses a nice stroke in the midrange area on out to the three-point stripe. The current region Co-Player of the Year had an overall efficient day shooting the ball and already looks in midseason form.

Mack is widely viewed as a pass first lead guard, but this offseason she’s made a concerted effort to be more aggressive scoring the ball. Yesterday, her craftiness and offensive creativity kept opponents off balance. Look for the Warner Robins junior to once again guide the Demonettes on a deep playoff run.

Pryor dazzled with signature celebrations after no-look passes and long-range bombs from downtown. Her energy level sparked teammates from start to finish. The lone Lady Charger senior has steadily improved each year and is poised for a big final campaign.

Grier, the reigning Middle Georgia Player of the year is known for scoring, but her facilitating capability was on full display at camp. She made precision passes to shooting pockets on drive and kick action and was phenomenal dropping dimes to post players in the painted area. Several Division-II schools have started to sniff around at the south-paw junior, so don’t be surprised to see offers start to come down the pike.

Grane (headline photo) has been one of the best prospects in Middle Georgia since entering high school and yesterday was no different. Her unique style allowed her to be equally effective from both guard spots. She was a top-notch distributor and effortlessly put the ball in the hole at every level.

Epps was competitive and consistent in a camp setting. She made impactful plays in key moments during live scrimmages and her leadership was noticeable. The Jones County senior turned in an overall solid day and will be a key piece for a sneaky good Lady Greyhound squad.

A defensive specialist best describes Minus. Her attention to detail frustrated opponents as she fully understands how to play passing lanes and is an expert on the ball. Every championship caliber team needs a glue-player capable of turning defense into offense and Minus will be a prime candidate for that job with the Lady Warhawks this season.

At 5-foot-10, Seaton is a big offensive minded guard that thrived inside the arc. The midrange assassin was automatic at the elbows and finished at the rim while taking contact. Her pace and ball skills jumped off the screen. Expect to see this name on college boards real soon.

McDuffie traveled up from McRae, Georgia and proved she belonged. She produced in a setting filled with talent and never backed down. Nowadays, visibility is at a minimum for players suiting up for single-A public schools in the Peach State, so it is important for those student-athletes to frequent exposure events. McDuffie is a name we’ve heard, but never seen live and she did not disappoint.

Harvey is a young, skilled point guard that knows how to break down opponents. She easily got what she wanted offensively whether it was penetrating the lane using angles or getting to sweetspots for pullup jumpers. Grab your popcorn as this Eaglette sophomore gets ready to build off a region Freshman of the Year campaign.

Hudson came into camp with something prove. Well, at least that is how we viewed it. She played with an edge, understood the moment, and took advantage of the stage. Offensively, the Northside-Warner Robins freshman attacked whoever was in front of her no matter the name and was physically imposing on the defensive side. Simply put, she is ready. 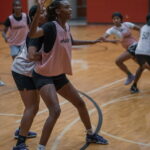 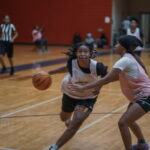